Exercise includes clear health benefits; however, recent studies have shown that very prolonged or strenuous exercise can be associated with negative cardiac effects.

Echocardiography of human athletes has demonstrated decreased myocardial contractility during the initial 24-48 hours subsequent to participation in endurance events such as Marathon or Triathlon. These findings have led to the hypothesis that the myocardium can be fatigued similar to skeletal muscles – a phenomenon that has been named Exercise-Induced Cardiac Fatigue. The exact mechanisms are unknown but the condition appears to be associated with myocardial damage as concurrent increases in plasma concentrations of proteins released to the blood upon myocardial disruption (cardiac markers) are frequently observed. Another more serious but rare phenomenon is “Sudden Cardiac Death” that affects apparently healthy athletes during or subsequent to strenuous exercise. Here too are the exact mechanisms unknown but cardiac arrhythmias are suspected to be the primary cause. The phenomenon affects both human and equine athletes and is subject to great public attention.

It is important to emphasize that exercise predominantly includes beneficial effects and the above mentioned issues are rare and associated with extreme exercise. However, participation in extreme exercise challenges has become increasingly popular among human athletes in the recent years and this warrants knowledge of the potential negative effects. Considering performance horses adds the additional aspect that the horses do not choose to participate on their own but are subjected to human will. Collapse or death of horses during training or competition is an extremely dangerous event to the rider and unacceptable for the horse. From an ethical point of view we therefore have to know the possible consequences of the physical challenges we place upon these horses in order to protect them.

This PhD project investigates the effect of prolonged physical exercise on the equine heart by examining endurance horses during training and competition. Endurance riding is the fastest growing equine discipline both in Denmark and internationally. The equipages compete on distances of 160 km in one day or 80 km/day during three days. It requires great skills of the riders to manage the horse’s energy in order to make it complete the ride. The ride is subdivided into shorter phases interrupted by resting periods where the horse is offered food and water. A veterinarian examines the horse at each checkpoint to assess if it fit to continue in the completion or should be eliminated from the competition. The completion rates vary with the length and difficulty of the ride but are unfortunately often less than 50%.

The purpose of the project is to study the effect of prolonged physical exercise in the form of endurance riding on the equine heart. The examination methods are known from human cardiology and includes echocardiography, ECG = electrocardiogram for examination of the heart rhythm, and blood sampling for examination of cardiac markers and systemic inflammation.

Phase 1
In 2011 a number of Danish endurance horses were examined both at rest and during exercise. The examinations were performed in the horses’ habitual surroundings and included examinations of the heart rate and rhythm at rest for 24 hours and during an incremental field exercise test. The exercise protocol was designed to include halts after each interval to enable investigations of the “heart rate recovery time” which is an important factor for endurance horses in relation to competition.

Phase 2
In 2012 the study included both Danish and international endurance horses who were examined before and after participation in endurance rides of 120-160km in international competitions in Germany and Sweden. Echocardiography and blood sampling was repeated on three consecutive days to examine myocardial contractility and cardiac markers before and after the competition. ECG recordings were obtained in the evening before and during the night after the ride to examine the heart rate and rhythm.

The results of both Phase 1 and Phase 2 are currently being assessed and the PhD thesis is expected to be defended late 2015. 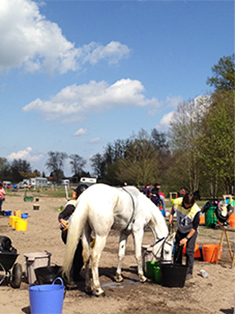