Cardiac arrhythmias occur relatively often in horses both during rest and exercise. Although most arrhythmias are of no clinical significance, atrial fibrillation (AF) is a common pathological arrhythmia severely affecting performance in horses.

Diagnosis of AF is based on cardiac auscultation, confirmed by an electrocardiogram (ECG) that shows irregularly irregular R-R intervals with normal QRS complexes, absence of P waves and the presence of f waves. Atrial fibrillation can be paroxysmal (where it comes and goes) and persistent (where the atria constant are fibrillating). A Holter ECG may be obtained in cases where paroxysmal AF is suspected but, for practical reasons, the duration of Holter ECGs is limited to a few days. Therefore, it can be very challenging to discover paroxysmal AF. Long lasting AF becomes more resistant to treatment, and early recognition of the disease is therefore essential. Although horses can be cardioverted into sinus rhythm (SR), AF reoccur in up to 43% of the cases after cardioversion –often without it being noticed until the arrhythmia leads to clinical symptoms.

Since paroxysmal AF also can be challenging to diagnose in human patients, new tools have been developed. Implantable loop recorders (ILRs) are subcutaneously implanted devices that continuously record and analyse the ECG of the patient. Through dedicated algorithms ILRs are able to automatically detect predefined arrhythmic events based on changes in RR interval, such as bradycardia, ventricular tachycardia, AF and asystole.

The aim of the present project was first, to evaluate four different anatomical locations of ILRs and their influence on signal quality at rest, over time and during exercise. Next, differences in AF burden in a chronic AF horse model were compared to the golden standard; Holter ECG.

The ILR showed stable ECG signals and they were able to automatically detect AF. Further, movement artefacts at rest were rare, and none led to a false positive AF diagnosis.

Based on these initial findings we have now implanted ILR in several horses with history of intermittent poor performance. So far, the ILR have discovered two paroxysmal AF episodes lasting less than 12 hours. Both days the trainer had noticed that, the horse were not able to perform as normal. 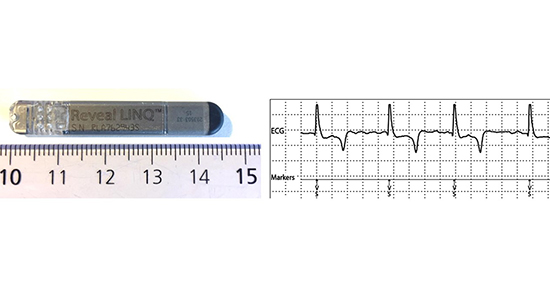