Atrial fibrillation (AF) is an arrhythmia where the overall control of the cardiac rhythm has been lost and uncoordinated electrical movements in the atria occur. Unlike most other animal species horses frequently develop AF. Treatment of AF is problematic in horses as the available antiarrhythmic drugs target ion channels in both atria and ventricles which can result in adverse cardiac effects such as ventricular fibrillation. Furthermore side effects, unrelated to the heart, are a limiting factor when treating horses with AF.

Knowledge about the cardiac action potential is important for the understanding of AF and thereby also for the studies on potential therapy strategies. Action potentials are driven by ion currents and these can be altered by applying ion channel blockers or modifiers. Multiple ion channels have been studied in several experimental animals and in the human atria but knowledge about their properties in horses is lacking.

For the in vivo studies a pacing catheter and a multipolar catheter for receiving right atrial ECG are placed in the right atrium of the horses. Atrial ECGs and simultaneous surface ECGs are recorded during programmed electrical stimulation at different pacing cycle lengths and atrial effective refractory period (aERP) is determined. This is followed by a fast pacing protocol to generate episodes of AF in order to investigate AF duration. Horses are then treated with infusion of Dofetilide or Ranolazine and the protocols are repeated to evaluate the electrophysiological effect of the drugs in respect to aERP, abrogation and duration of pacing induced AF 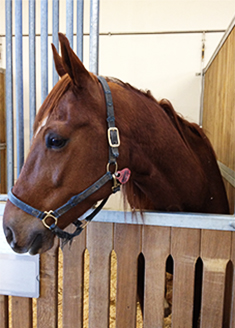