Started in February 2010 by Philip J. Pedersen, and continued since 2015 by Dagmar Trachsel.

Cardiac repolarization describes the end of the electrical activation of the heart and corresponds to the relaxation phase of the heart. This phase is very important as even small disturbances can cause arrhythmias and sudden cardiac death (SCD). Disturbances in the repolarization phase can be caused by disease, genetic deficiencies or drugs and can lead to conditions called repolarization disorders. The repolarization disorders are recognized in patients by analyzing the surface ECG and by demonstrating an increased duration of the time interval between two deflations of the ECG, namely the Q and T wave. The prolongation of this QT interval has led to the name of Long QT syndrome (LQTS)

These repolarization disorders have received a lot of attention in the last years in human medicine and their pathophysiology has been studied in detail. The LQTS has been linked to an altered function of ion channels of the heart cells, especially the potassium (K+) channels. This abnormal function can be caused by mutations in ion channel encoding genes, resulting in altered expression of the channels or changes in their ability to conduct ions across the cell membrane. Administration of pharmacological treatment that affects ion channel function can also lead to disturbances in the cardiac rhyme. In recent years several of commonly used drugs have been withdrawn for the human drug marked because such cardiac side effects. Nowadays human drugs are investigated for interactions with cardiac ion channels before they are released on the market. But this is not the case in veterinary medicine. Several of the drugs known in human medicine to induced rhyme disturbances are still widely used in veterinary medicine.

SCD during sports events occurs both in human and equine athletes. In human medicine SCD occurring during exercise have been linked to one subtype of LQTS related to a genetic mutation in one of the K+ channels. Because of the relationship between repolarization disorders, mutations in potassium channels and SCD in humans it seemed reasonable to investigation the particularities of the repolarization in horses. The aim of the project is therefore to characterize the repolarization and the involved channels in horses, to demonstrate the presence of inherited and acquired LQTS and to demonstrate a possible relation between presence of LQTS and SCD in horses.

1) Normal QT –interval: to establish the diagnosis of a repolarization disorder the normal length of the QT interval has to be known. Further, the QT interval depends on the heart rate (HR) and correction formulas have to be used to overcome this particularity.

As a first achievement of the project the normal duration of the QT interval has been established in horses over the entire range of the HR, from resting to maximal HR achieved during full speed exercise. Subsequently, a formula for HR correction adapted for horses has been established and can now be used in future studies. Further, diurnal modulation, gender and breed variations have been documented.

2) Functionally important potassium (K+) channels in horses: In humans the main repolarization currents in the ventricle are mediated through K+ channels, the most important being the IKs (meditated by the channels subunits Kv7.1 and KCNE1, encoded by the genes KCNQ1 and KCNE1, respectively) and IKr (mediated by the channel subunits Kv11.1 also known as hERG in human medicine and KCNE2, encoded by the genes KCNH2 and KCNE2, respectively). Approximately 80% of LQTS in humans are related to genetic mutations in one of these two channels. To investigate whether repolarization disorders exist in horses we first demonstrated the presence and the functional importance of these 2 K+ channels in the horse heart and we establish the genetic sequence for the channels and their subunits.

As second achievement, the equine sequences of KCNQ1 and its subunit KCNE1 (responsible for IKs) and the KCNH2 and subunit KCNE2 (responsible for IKr) have been made public on the Genbank® with the access numbers KY753876 (Kv7.1), NM_001289961.1 (subunit KCNE1), HM641824 (Kv11.1) and KF937396 (subunit KCNE2). These sequences were also used to produce clones that allowed us to express the K+ channels in electrophysiological models and to investigate their function in presence and absence of drugs.

3) Drug interactions with relevant K+ channels: To assess the function of K+ channels in presence or absence of drug in vitro experiments are the starting point and in a second step the effect of the identified drugs will be assesses on the surface ECG in in vivo studies.

A further achievement of the project that allows us to study drug interactions was the development of a series of voltage protocols that address in particular the function and gating properties of Kv11.1. Electrophysiological measures by TVEC techniques on a oocyte model and subsequent in vivo experiments allowed us to induce an acquired LQTS with a non-cardiac drug in horses. These findings will open up the possibility of a discussion about drug safety in equine medicine. These findings were also the starting point for a screening for drug interaction on a larger scale.

4) To assess the relation between LQTS, K+ channels polymorphism and SCD we are investigating the genetic background of horses that died from SCD. Further, we have found one case of a naturally occurring LQTS and pedigree analyses are running to deepen this part of the project.

We have generated a large amount of new data on equine repolarization and on possible mechanism that can lead to SCD in horses. The published data increased the awareness of SCD, LQTS and repolarization disorder in the equine industry.

However, further studies will be needed to fully assess the regulation of the repolarization in different parts of the equine heart and to address therefore the electrophysiological differences that exist between human hearts and horse hearts. 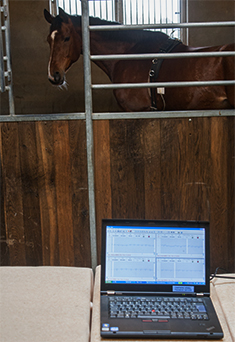